As we shift our consciousness to its new expanded view, we discover everything around us shifts and changes too. Sometimes it seems one thought, word or action has set off a domino effect, and that everything has come tumbling down.

Our consciousness can be thought of as a spectrum of colours, like a rainbow. Each strand of the rainbow is coloured by the vibrational frequencies it holds, and depending on where we sit in the rainbow at any given time, our reality is mapped to that band of colour and the potentials it contains.

When we have been seated in one band of colour for many years, perhaps a lifetime (or hundreds of lifetimes) we become very familiar with the reality that develops within the potentials of that colour. We feel safe and secure in this reality, and we tend to become quite resistant to changing anything in our lives; our work, our friendships, our food, our lifestyle…in fact we like things just the way they are! Just like the Emerald City in The Wizard of Oz, where everything was green and The Wizard was deemed to be the oracle of wisdom.

That is, until Dorothy came along and challenged the old beliefs held by the people of Oz. Along the way she helped her new friends, Scarecrow, Lion and Tin Woodman reclaim their tools of empowerment; intellect, courage and a heart. With her delightful joy, self-belief and a keen sense of truth, she helped others to move into another colour band on the spectrum, where they could see so much more than from where they had previously been. And they were ready to do this, otherwise, Dorothy would not have appeared among them.

Our teachers and messengers come in many shapes and forms, and always at the time of our readiness for change. Take note of who is showing up in your life, and look to see if they are a messenger for you. Especially if you find them challenging on some level, as this is a sure sign you have both asked for this situation to arise, so that healing of an old wound, the balancing or Energies can occur. The ones who seem to be the greatest thorn in your side are also the greatest gifts as they are the catalysts of change!

You may have noticed that the challenges coming to you seem to be thick and fast now, with very little resting space in between. It may seem that you are coming unstuck with the people who have been in your life for a long time, or that great changes seem to have been forced upon you. You are not alone; this is happening to humanity all around the globe. Just look at the changes the weather elements are creating for millions of people. We can be grateful in New Zealand that we are not in war zones or extreme weather zones yet change is happening here too through earthquakes, flooding, health issues, career changes, values, priorities alliances and relationships.

Change can be embraced and celebrated! If change has come into your life then you have asked for it on the Inner Planes. Congratulations! Something is ready to be healed, balanced and released…well done! And it can happen from one moment to the next, as consciousness can shift in a Nano- second, creating a change in all of ‘your dominoes’, the various aspects of your life, that were stacked against it.

Now, look to see which band of colour your dominoes have fallen into…and which band of colour do you now choose for yourself, now that you can see further than you could before? Which part of the rainbow does your heart wish to sit in, and which dominoes do you wish to take with you? You may discover that to move to the colour band of your heart’s desire, that some of your dominoes simply can’t go there…they are of a different vibrational frequency…now is the time to honour, then release that which you cannot take with you as your move forwards in your ever-evolving consciousness. Celebrate what has occurred and give thanks to those who helped you make this mighty leap into another band of colour, to another realm of possibilities and potentials to explore and evolve in. Rest in the peace that follows the upsets of change, and revel in the freedom and expanded possibilities that your courage is rewarded with!

And remember, the only thing that is certain…is change! 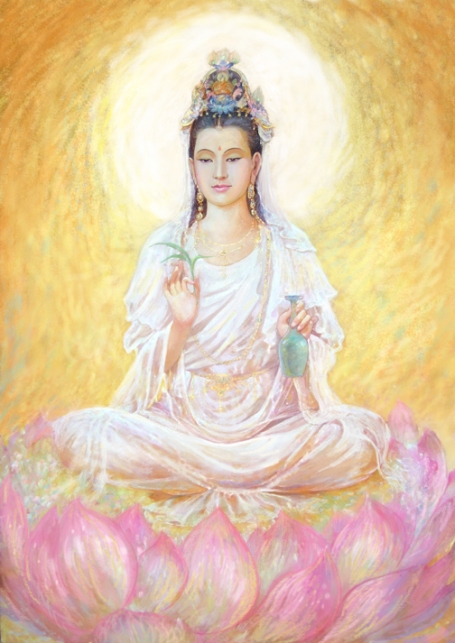 In 2012 I published my first book, ‘Dry Your Tears’ which described my journey as an awakening soul, triggered by the sudden death of my teenage son. I had no idea when my son died in the millennium year that I would eventually become a messenger for thousands, millions of others who will inevitably also experience the passing of a partner, son, daughter, sibling or friend, including those of the animal kingdom. If the concept of the Eternal Soul and Eternal Life is beyond your current belief system, I invite you to at least be open to the possibility that we need not respond to the transition of a loved with disbelief, shock, or fear, let alone live forever burdened with grief.

It took me nine years to truly understand that there is no death, and another three years to actually embody that understanding, turning it from knowledge into a living wisdom. During the first nine years I approached death and grief as most people do, through the mind. I diligently became resilient as required by society, and eventually bullet-proof as I adapted my life and refused to be seen as a ‘victim of grief’.  Never one to do things by halves I went sailing for six years to prove how strong I was; a powerful free spirit, allowing the winds of great oceans to keep me free from the shackles of grief! Harr!

Finally living ashore again in 2009, I met ascended master Quan Yin, the Goddess of Unconditional Love, Compassion and Forgiveness. Horrors! I was soon to discover I was not resilient at all as she set about gently dismantling my mental rigging until the one thing I had been avoiding was revealed …my very tattered Heart. Oh dear, it was so firmly shut down I didn’t even know it wasn’t functioning… No wonder I hadn’t felt anything anymore!

Under her loving gentle guidance, I began to work with an ancient healing/ascension heart-focused technique which gradually began to allow my Heart to heal and slowly open, chink by chink. Ouch! It was soooo painful! But Quan Yin’s beautiful frequencies of Love and Compassion were flooding me every time I practised the technique; she was literally holding me in her energies until my own reservoir of self-love had become full.

As the months went by I realised I was beginning to sense an aspect of myself that had previously been hidden; I was able to feel love again! This continued to expand and grow until finally I could meet my beloved son in my heart-space, without dissolving into tears. As my heart continued to heal I discovered I could love myself and others in a way that had not been possible before. We cannot love another until we love ourselves.

I have found that it is essential to work with knowledge we are given and to anchor the frequencies that go with it. Otherwise it simply remains knowledge which is not serving the purpose it was intended for; to move us along in our Soul journey. We could even go so far as to say that when we have knowledge yet don’t actively apply it in our daily lives, we are missing the full potentials of these gifts. It was grief that offered me the most valuable treasure of all; Unconditional Love and Compassion.

Now, sixteen years since my darling son Tim (aged 17 years) ‘died’ in a car crash just like his uncle did a few days ago, I speak through my Voice of Divine Wisdom and Divine Love when I say that it is absolutely possible that we can experience the transition of a loved one without being crippled by grief, shock, horror or fear. These feelings are all frequencies that are found in the spectrum that vibrates as a resonance less than Unconditional Love and Compassion. When we heal all of the wounds that belong in that spectrum, we move into a new spectrum where the range of feelings don’t include the previous ones. It was the transition of my brother four days ago that alerted me to this revelation that ‘grief does not dwell within me anymore.’ I realised that those frequencies were no longer available to me. Instead, I Am at peace as I celebrate his journey home to the Light Realms and I salute another human journey on Earth.

If grief has come to your door, welcome this unexpected guest like a long-lost friend who has come to share a magical journey with you. Let the tears  flow freely and the laughter to mix comfortably. Allow a surrender of self so that unseen ones may hold you in their loving embrace, lifting you above the mundane so you can glimpse the potential gifts offered; what you choose to receive is up to you.

I feel it is curiously synchronistic that the topic of releasing old belief systems surrounding death and grief is revisited just two weeks before Raeul and I present an event at sacred mountain Aoraki/Mt Cook, which is very much connected. Titled ‘The Resurrection of the Golden Light of Christ’ we are invited to remember the true state of humanity is Divine Love, Divine Wisdom and Divine Power. When we embody these qualities we also embody a Golden Light in our entire cellular body and Chakra system which is seen by others as halos. Eternal Life is a very real aspect of our Divinity and as told to us by Jesus (and by many ancient teachers before Jesus such as Quan Yin and Tibetan Masters, is available to all who choose it. Annwyn Hanham 6/8/2016